In Search of the Kenwardstone 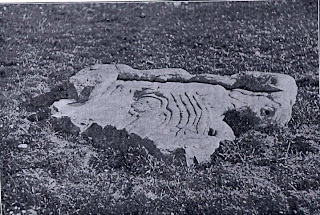 In Search of the Kenward stone - Chute Causeway

Ken Watts in "Exploring Historic Wiltshire" records that a 19th century farm labourer recalled moving the stone from Kinwardstone Farm at Burbage 5 miles away. However it seems odd to move a large stone this distance to such a remote spot when field clearances normally involved moving sarsens to the edge of a field or breaking them up. Kinwardstone itself is the name of the local medieval hundred.

The stone is highly unusual and only a geologist can determine whether the markings are natural or man made. Some sarsens carry striations caused by glacial movement and the lines look less clearly man made than the grooves for example on the Polissoir Stone at Avebury.

The stone lies at the edge of a pit (which may relate to the building of the adjacent Roman road along Chute Causeway). There are three sarsens in the Churchyard at Tangley (St Thomas of Canterbury) and remnants of a sarsen chambered tomb at Tidcombe longbarrow a mile away.

Visitors to our offices are often impressed with our collection of "Do Not Disturb" signs. It began about 15 years ago and now features several hundred examples of this often neglected art form. They have come from as near as Marlborough and as far as Mongolia and Bali so if you would like to contribute to our collection please post us any that you come across - they will be very much appreciated.

People also ask about our name.- Kinwardstone. It is now unique to Burbage and the following is a short explanation of its probable origin:

England's administrative system was established during the Saxon period. They created the Shires (controlled by the Shire Reeve or Sheriff), which were in turn divided into Hundreds, but the latter's power gradually declined until they were replaced by the District Councils in 1894. Typically, the Hundred's elders met monthly at an open place to consider local criminal offences, minor ecclesiastical matters and to levy local taxes. Wiltshire was divided into about 40 Hundreds of which Kinwardstone was the second largest. It's Court reputedly originally met at a now ploughed out tumuli in a field near Kinwardstone Farm, Burbage. In later years they more sensibly met at the White Hart Inn, Burbage.

The name probably came from a local Saxon royal (or 'cyne') called Werstan or Wickstan who achieved victory over Ethelmund, Earl of Worcester, about 800AD. It is claimed that a stone was erected on Chute Causeway in celebration of his victory and our logo is derived from its carvings.
Posted by The Cinquefoil Press at 10:43