i thank you god for most this amazing 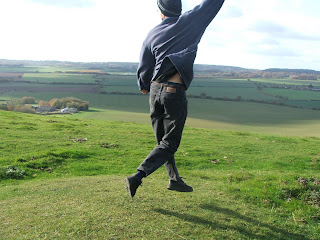 i thank You God for most this amazing
day:for the leaping greenly spirits of trees
and a blue true dream of sky;and for everything
which is natural which is infinite which is yes

(i who have died am alive again today,
and this is the sun's birthday;this is the birth
day of life and of love and wings:and of the gay
great happening illimitably earth)

how should tasting touching hearing seeing
breathing any--lifted from the no
of allnothing--human merely being
doubt unimaginable You?

e e cummings
Posted by The Cinquefoil Press at 07:49 No comments:

An Interpretation of Rabelais

For book-lovers in these Islands - even for those who are not linguists - Rabelais has one peculiarity which sets him far apart from Montaigne and Cervnates and considerably apart even from Shakespeare - though there do exist certain prose-passages in the plays, where pure poetical nonsense approximates to the Hercules-in-his-cradle nonsense of which I speak - the use of planetary babyishness.

The humorous exploitation of infancy, godlike, titanic or human, lies at the heart of Rabelais' genius and is the clue to his whole work. Such megalosaurian burlesquing of babyhood is unique in literature.

It is no wonder Rabelais went such a long way in sympathy with very young children;for in a manner hardly anticipated by Jesus he took the latter's saying about becoming like a little child literally, in the sense of becoming like an ordinary, harmless healthy , sense-absorbed, indecently shameless babe or suckling.

I would not care to use the pseudo -scientific catchword 'infantile fixation' in regard to Rabelais' cosmogogic babyishness; for with a nature so over-brimming with the vital enjoyment of every kind of adventure it is absurd to talk of 'fixation'of any sort...

... Rabealis had plenty of stoicism; but the orthodox stoic ataraxia or indifference to both pleasure and pain, which Pantagruel displays now and again, is a very different thing from the monochronos hedone, of 'Pleasure of the Ideal Now' which is so satisfying to a little child.

I think we might say that the richest release the soul of Rabelais owed to this Herculean Infantilism was an escape from the tyranny of logic.

The most dangerous and wicked aspect of every sort of orthodoxy has always been its deadly, fatal and insane logic. The worst weapon of totalitarian tyrants is always the Syllogism ( insert - definition 1. Logic. A form of deductive reasoning consisting of a major premise, a minor premise, and a conclusion; for example, All humans are mortal, the major premise, I am a human, the minor premise, therefore, I am mortal, the conclusion. or Reasoning from the general to the specific; deduction..): and what Rabelais' Noble giants had to contend with were Justinian's despotic logic in Civil Law, and Papacy's despotic logic in Canon Law, and in theology the dolorous choice between the logic of the Sorbonne and the logic of Calvin.

But this tyranny of logic can show itself in the most unexpected places; and one of the most daring Jack-and-the-Beanstalk mischiefs in which Rabelais indulged after cutting the umbilical cord of scholastic theology was to pit the laughing and crying caprices of pure babyhood against the portentous 'cause-and-effect' solemnity of old wives' prognostications.

Yes he would go so far - crazy as the attempt might seem - as to untie the very apron-strings of the ancestral, matriarchal, school-marm orthodoxy of our grandmothers' proverbs.

Rabelais in fact has found out the secret of all 'little children'; not only of the good ones who crowded about the knees of Jesus, but of the bad ones who 'made the fig' and ran away. Rabelais' great Burlesque ought to be performed as a Ballet with all the ethereal profanity and fairy-like obscentiy of his admired clown 'Songe-creux,' and with an orchestra of tragi-comic classical music.

And the grand secret of little children consists in their recognition that the mystery of live, just as it is, makes all philosophical and scientific explanations of it laughable and all relgious ones mad...
Posted by The Cinquefoil Press at 03:13 No comments: