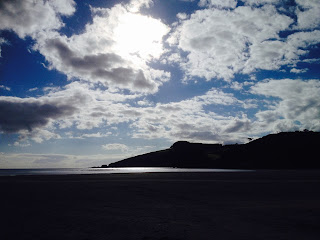 Near the headwaters of the longest river
There is a forest clearing.
A dank, misty place,
Where light stands in columns
And birds sing with a noise like paper tearing.

Far from land, from the trade routes,
In an unbroken dreamtime
Of penguin and whale,
The seas sigh to themselves,
Re-living the days before the days of sail.

Where the wires end and the moor seethes in silence,
Scattered with scree, primroses,
Feathers and humus,
It shelters the hawk and hears
In dreams the forlorn cries of lost species.

It is here that the banished gods are in hiding.
Here they sit out the centuries,
In stone, water
And the hearts of trees,
Lost in a reverie of their own natures.

Of zero growth, economics and seasonal change,
In a world without cars, computers,
Or chemical skies.
Where thought is a fondling of stones,
And wisdom a five minute silence at moonrise.

by Benjamin Grafton 2007
Posted by The Cinquefoil Press at 03:29 No comments: 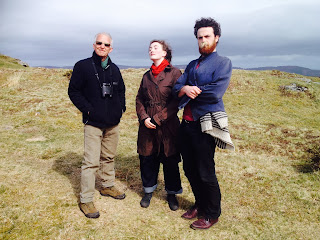 We'll catch our fish and watch the birds,
And hunt for mushrooms in the earth,
And if there's a name you haven't yet heard,
It'll be story after story and our souls, they won't get old.

We'll joke around and start up fights,
And tell long tales into long bright nights,
And if theres's a wrong you set to rights,
There'll be story after story, and ours souls, they won't get old.

We'll wear out our bodies and we'll use all our heart,
We'll take in every moment, the bright ones and the dark,
We'll cash in every chip, and we'll play every card,
And it'll be story after story, and on our souls you leave your mark.

Posted by The Cinquefoil Press at 02:56 No comments: