Do What Thou Wilt 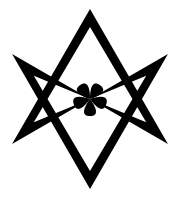 The unicursal hexagram, is one of the key symbols within Thelema, the tradition founded by Aleister Crowley in the early part of the twentieth-century. Crowley did not invent the unicursal hexagram, the emblem was created by the Hermetic Order of the Golden Dawn and adapted by Crowley for his own use.

Crowley's adaptation of the unicursal hexagram placed a five petaled rose, symbolizing a pentacle (and the divine feminine), in the center; the symbol as a whole making eleven (five petals of the rose plus six points of the hexagram), the number of divine union.

Combined with the Marian Rose, the unicursal hexagram becomes Crowley's personal sigil, which is the magical union of 5 and 6 giving 11, the number of magick and new beginnings.

When Crowley introduces the unicursal hexagram in his The Book of Thoth he writes that "The lines, however, are strictly Euclidean; they have no depth.

Thelema is a philosophy of life based on the rule or law, "Do what thou wilt." The ideal of "Do what thou wilt" and its association with the word Thelema goes back to François Rabelais, but was more fully developed and proselytized by Aleister Crowley,who founded a religion named Thelema based on this ideal. The word itself is the English transliteration of the Koine Greek noun θέλημα: "will", from the verb θέλω: to will, wish, purpose. Early Christian writings use the word to refer to the will of God, the human will, and even the will of God's opponent, the Devil.

In the 16th century, François Rabelais used Thélème, the French form of the word, as the name of a fictional Abbey in his famous books, Gargantua and Pantagruel. The only rule of this Abbey was "fay çe que vouldras" ("Fais ce que tu veux," or, "Do what thou wilt"). This rule was revived and used in the real world in the mid 18th century by Sir Francis Dashwood, who inscribed it on a doorway of his abbey at Medmenham, where it served as the motto of The Hellfire Club.[8]

The same rule was used in 1904 by Aleister Crowley in The Book of the Law. This book contains both the phrase "Do what thou wilt" and the word Thelema in Greek, which Crowley took for the name of the philosophical, mystical and religious system which he subsequently developed. This system includes ideas from occultism, Yoga, and both Eastern and Western mysticism (especially the Qabalah).[14]

Shri Gurudev Mahendranath, in speaking of svecchachara, the Sanskrit equivalent of the phrase "Do what thou wilt", wrote that "Rabelais, Dashwood, and Crowley must share the honor of perpetuating what has been such a high ideal in most of Asia...

Wikipedia
Posted by The Cinquefoil Press at 08:03