On the Other Side of the Quantocks 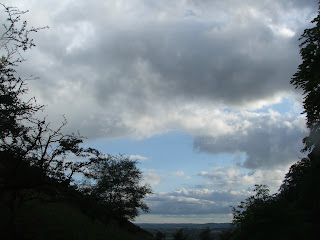 Looking towards Crowcombe
“Friendship goes dancing round the world proclaiming to us all to awake to the praises of a happy life.”
Epicurus

… At last I was on the summit and looking with corporeal eye at this prospect, which on so many different occasions, in places so far from Crowcombe, had been present to the inward vision of my mind. Under the bright cold sky of that April evening I could see the hills in all their glory, fold upon fold, combed below combe, falling ways ot the western ocean. On the farthest horizon it was possible to make out the mountains of Wales, while in the mid-distance, set in the silver sea of the Bristol Channel, was the island of Steep Holmes standing b lack against the water, black against the parrot-green nursery meadows that slope down to the very shore.

Always as children we had longed to see a red deer. In vain we had searched for one, diligently exploring each grove of stunted oak trees, pushing our way through every patch of bracken that seemed dense or secluded. We had followed the mountain streams from one rocky basin to another, but on no single occasion had we disturbed hind or stag. Now after all these years my luck had changed. For as I walked through the heather stalks blackened with fire I suddenly became aware that two of these animals had risen not fifty yards away. They were so large that almost I could imagine myself back in the highlands of Africa looking at waterbuck. For a moment they remained motionless, gazing at me with the concentrated attention characteristic of wild life suddenly disturbed by man, as though even in these latter days the appearance of our kind, erect and biped, still had something startling about it, something that demanded a more exact ocular investigation than an ordinary object in nature. Then in an instant they were away over the next ridge, their antlers clear-cut against the sky, moving with a succession of absolutely silent leaps, as animals in a dream, as beasts on a tapestry come miraculously to life.

I have often noticed that any particularly favoured sight of Nature’s more perfect disciplines is apt to remove for a certain time those limitations of perception that use and wont so quickly impose upon us. Without warning, without reason, we find ourselves suddenly able to experience emotions roaming and marginal, to see life with the eye of Merlin. This happened to me now as I rested on a heap of dry heather half-way down the lane, at the very spot where as a boy I had lost my silver birthday watch among the whortleberries.

Night was already falling. Never had I seen the panet Venus more beautiful, never had I seen her shine with a light more firm. As I looked at her in her isolated loveliness, the heels of my boots pressing into the soft mould of the familiar earth, and with my senses enmeshed in mystery, suddenly there was a sound of church bells upon the twilight air. It was at that moment as if this Christian sound coming up from the village below belonged really and truly to another world, a world without sorrow or death, a world no longer rude, a world where love was as gentle as mill-stream flowers and as eternal as light. Up through the naked beech tree branches came the sound as from a great distance, the fitful cadence of its tintinnabulation borne, now soft, now loud, upon the restless winds of the wood.

All Christmas nights were in the sound and all New Year Eves. It tolled for the passing of the souls of all men, of all women; it chimed for the wedding processions of true lovers who for centuries have slept dreamless far under the roots of the red-berried yew trees. Now it sounded dolorous as the stroke of a harbour bell giving warning of danger in the dusk of an autumn evening; now happy as a chime from the turret of a chapel, when cuckoo-flowers and kingcups are out in the water meadows, and the prince and princess at play in their garden bower.

It was as though these bell clappers were truly ancient medieval tongues telling of days out of the past; telling of antique cradles of the enchanted web of flaxen sheets grey with age; telling of churchyards still prosperous and emerald bright, but where the strife of this naughty world has been for ever cancelled, and where the knight and his lady have been lying without lust for a period without computation, and where the rook boy elbows the goose girl and the hen wife the swineherd with the ugly brown teeth. It was the music out of the past. It told of what might have been and never has been; a music of the very borderland of the wilful senses; a music of a paradise serene and glad, where impassioned phantoms wander free, their minds, their bodies, at peace at last…