Walking the Runes - The writings of Iain Sinclair 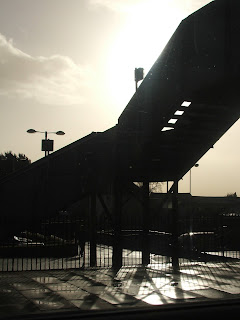 “Iain Sinclair has charted the multidimensional landscape of London for the last twenty five years. He is a ‘psycho geologist’ of the ancient sites of the capital, imbued with mythology both archaic and modern. Ley lines merge with subterranean rivers, the shadows of the gothic churches mingle with the blood of murderers, phantoms and pulp fiction. The mysteries of Britain re-emerge not only in obvious sites such as Greenwich or Parliament Hill, but in such places as second-hand shops, a derelict synagogue, forgotten alley-ways, lost sites to ancient gods, glimpsed between the steel and glass walls of the City. Among the flotsam and jetsam of the River Thames, sacred artefacts are salvaged. Sinclair’s excursions into London have him encounter a diverse array of eccentric characters, some fictional, others historical, many still living. In the footsteps of William Blake and Arthur Machen he manages to excavate the mystical folklore of a bewildering city. In Lud Heat and Suicide Bridge (1975/79) he writes:

“Moving now on an eastern arc are the churches of Nicholas Hawksmoor soon invade the consciousness, the charting instinct. Eight churches give us the enclosure, the shape of fear, built for early century optimism, erected over a fen of undisclosed horrors, white stones laid upon the mud and dust. In this air certain hungers were activated that have yet to be pacified; no turning back, as Yeats claims: the stones once set up traffic with the enemy.

A triangle is formed between Christ Church, St. George in the East and St. Anne, Limehouse. These are centres of power for those territories; sentinel, sphinx-form, slack dynamos abandoned as the culture they supported goes into retreat. The power remains latent, the frustration mounts on a current of animal magnetism, and victims are still claimed.

St George, Bloomsbury, and St. Alfege, Greenwich, make up the major pentacle star.. The five card is reversed, beggars in snow pass under the lit church window; the judgment is disorder, chaos, ruin, discord, profligacy. These churches guard or mark, rest upon, two major sources of occult power: the British Museum and Greenwich Observatory. The locked cellar of words, the labyrinth of all recorded knowledge, the repository of stolen fires and symbols, excavated god-forms - and measurement, star knowledge, times of calculations, Maze Hill, the bank of light that faces the Isle of Dogs,. So many spectres operte along these fringes; Yeats in the British Museum, at the time of the Ripper murders, reseraching into Blake (Blake and Newton, polar opposites). Milton: his early-morning walks over the ground where St George was to be built. The only Hawksmoor church tht could not be properly orientated.”

As a one-time second-hand bookseller and publisher, Iain Sinclair has mined the rich terrain and substrata of literary and historical London. his writings are crammed with extraoridnary characters worthy of Conrad and de Quincey. Frm the Kray twins in the East End, to Lord Archer aloft his penthouse overlooking Millbank, to the urban shaman’s exploration of inner worlds in the Ball’s Pond Road or Buddhist bovver-boys in Bethnal Green, the spirit of London tears through the mundane appearances of everyday life. In 1997 he collaborated with artist Rachel Lichtenstein in her investigations into the mystery of the vanished David Rodinsky, who had been lodging in the attic of a a synagogue within the shadow of Hawksmoor’s Christ Church in Spitalfields.

With the advent of the Millennium, Sinclair explored the surrealist terrain of the mudflats near Greenwich where the silver dome reflects the grey skies. The building evokes Fifties science fiction comic strips, gothic horrors, marvellously sinister food for the Neo-Romantic imagination.

“As I crunch over the shingle beneath Folly Wall on the eastern shore of the Isle of Dogs at first light on an early summer morning, the Dome shines across the leaden water like a brilliant shell. This is a setting that deserves to be recognised as one of J G Ballard’s terminal beaches: the last council-operated high-rise block behind me and an unscripted future ahead, the yellow-spiked Teflon tent like a genetically modified mollusc.”

Sinclair’s fascination with London has created new psychogeographsial dimensions on the map. The A-Z seems to take on occult significance with the realignment of energies connecting the dark churches of Hawksmoor, centres of occult power, with seemingly mundane, but surprisingly esoteric street markets, no-go estates, black dogs, esoteric forces at work in an ever changing city.

In Asylum - or the Final Commission, a documentary for Channel 4, in a joint venture with film-maker Chris Petit, Sinclair is found walking along the Great Green Way. This lost track stretches from West London via Heathrow, making its way through a strange hinterland of secret dells, thick with bracken, barbed briars, bushes abundant with blackberries, poison ivy, red capped mushrooms, to the River Thames at Staines. Marina Warner warns us of the dangers of discovering fairy paths or secret routes. They can be paths of liberation or paths of ensnarement. The documentary is on the edge of disintegration, past and present fusing, memories exploding like time bombs. Science fiction writer Michael Moorcock appears disguised as a backwoods renegade in darkest Texas, the Beat poet Ed Dorn cries at the atrocities inflicted by the USA on Iran and Yugoslavia. Not easy watching, Asylum is rich with secret history. It is an accurate description of writers and artists exploring another world beyond the subscribed culture.”