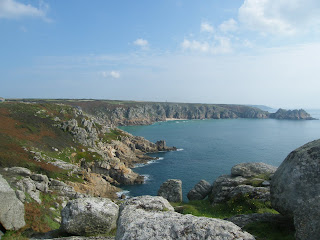 Nature was here something savage and awful, though beautiful. I looked with awe at the ground I trod on, to see what the Powers had made there, the form and fashion and material of their work. This was the Earth of which we have heard, made out of Chaos and Old Night. Here was no man’s garden, but the unhandselled* globe. It was not lawn , nor pasture, nor mead, nor woodland, nor lea, nor arable, nor waste land. It was the fresh and natural surface of the planet Earth, as it was made forever and ever, - to be the dwelling of man, we say, - so Nature made it, and man may use it if he can. Man was not to be associated with it. It was Matter, vast, terrific, - not his Mother Earth that we have heard of, not for him to tread on, or to be buried in, - no, it were being too familiar even to let his bones lie there, - the home, this, of Necessity and Fate. There was clearly felt the presence of a force not bound to be kind to man. It was a place of heathenism and superstitious rites,- to be inhabited by men nearer of kin to the rocks and to wild animals than we… What is it to be admitted to a museum, to see a myriad of particular things, compared with being shown some star’s surface, some hard matter in its home! I stand in awe of my body, this matter to which I am bound has become so strange to me. I fear not spirits, ghosts, of which I am one, - that my body might, - but I fear bodies, I tremble to meet them. What is this Titan that has possession of me? Talk of mysteries! Think of our life in nature, - daily to be shown matter, to come in contact with it, - rocks, trees, wind on our cheeks! The solid earth! The actual world! The common sense! Contact! Contact! Who are we? Where are we?

Posted by The Cinquefoil Press at 04:54