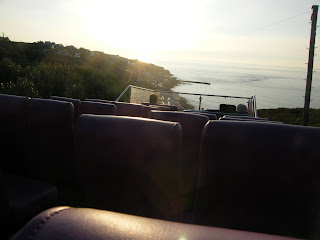 On top a double decker bus heading for Sennen Cove

It is a memorable moment in one’s intellectual life when one realizes that it is not learning for learning’s sake, or knowledge for the sake of knowledge that is the object of our secret struggle with inertia and futility. It is simply that we may enjoy the most exciting sensations that life offers; and enjoy them over the longest possible extension of time. Among such sensations one of the most thrilling is that vague feeling of old countryside romance which emanates from certain far-off highways and certain remote villages. Standing upon some old stone bridge where the moss grows green and untouched on the curve of the dark arches above the water, one often feels that there is a silent unspeakable secret hovering about such places that no writer has ever really caught. Perhaps these are things that cannot be caught; but, if they ever are, it will be by a mind that has made of such memories a rich, dim background, a background full of supernatural power that has the strength to push back, if not to obliterate, the crude pressure of modern preoccupations. Such a mind was that of Emily Bronte. Even if your nature finds something monstrous and shocking about the physical brutalities in “” …(it) is indeed a terrific emanation – the breaking out of an electric storm – from that obscure reservoir of unexpressed yearnings that most hearts conceal under a thousand decorous masks. To lose the power of imaginative sympathy with their dark thunderous ways were to subside upon a sort of death-in-life! From such a death-in –life Emily Bronte exultantly releases us, as if she were herself on of those strange mythic figures in William Blake’s pictures.

The place occupied in the older times by poetry seems in our own day to be occupied by imaginative prose. The role of culture among modern minds must imply, therefore, an attempt to turn all the critical searchlights we can summon upon contemporary writings, choosing what stimulates us and avoiding what disintegrates and confuses us. The desirable effect upon one’s mind of imaginative literature is not to strengthen one’s memory or enlarge one’s learning, or to inspire one to gather together a collection of passages from “great authors”; it is to encourage one to learn the art of becoming a “great author” oneself; not in the sense of composing a single line, but in the sense of sufficiently detaching oneself from the chaotic spectacle of reality so as to catch on the wing that fleeting loveliness of which no genius has the monopoly and which only the stirred depths of one’s own deepest nature can prevail upon to pause in its eternal flight.

Posted by The Cinquefoil Press at 04:22