Man is a Link 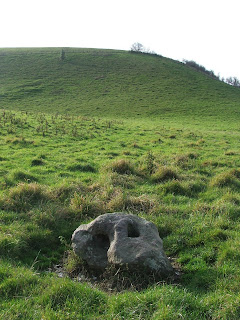 The Omphalos in the hills above Kingston Deverill

Man is a link in a long spiral ascent, not finality. And in all of us there are non-human moods and feelings, some of which release long-buried atavisms from the past, while others contain hints and premonitions of what will be or what might be in the remote future.

The disturbing and magical power of human freewill renders any kind of determinism impossible. All manner of incredible experiences, anticipating the future are to be expected. So also are all manner of incredible reversions. We have no right to assume that in the process of biological variation the whole advantage is with the present condition of human life. In the great process of cosmic change, many states of existence contained elements of consciousness superior rather than inferior to what we possess as human beings to-day. Because there has been change we have no right to take for granted that there has invariably been progress.

The power of the human will in relation to biological evolution is much more important than is usually realised. Certain distortions of human "reason" in the direction of mechanical logic - an altogether misleading and quite paltry by-alley of modern thought - have done untold harm in abrogating from the power and dignity of this creative sorcery within us. The moment any human soul begins to have faith in itself, in its unfathomable potentialities, in its untried powers of will, a great flood of liberation sweeps through it.

Every individual personality is like a vast cavern with endless avenues and stairways, leading up and down, leading north, south, east, and west. All have that in them which belongs to the vegetable world. All have that in them which belongs to a still earlier world inorganic stellar nebulae. And we also have moods of strange prophetic premonition in which we anticipate in our feelings the feelings of those mysterious superhuman beings who in the process of time will take the place of humanity... (!)
Posted by The Cinquefoil Press at 06:04