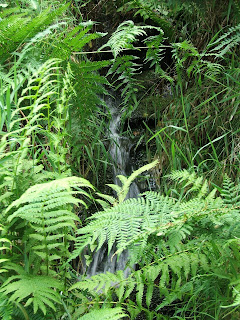 Along from Dunkery Beacon

….All sensuous moments, all divine moments occur in solitude and silence – except in the single case of exchanging ideas with anyone you have singled out to love. And in that one exception it is in the silences that follow the words, where the countenance is illuminated and the eyes wet with tears, rather than in the words themselves, that the ecstasy is consummated, between the “good” in the twi-natured First Cause and the “good” in each of the excited interlocutors of cosmic rapport is reached.

Life is far too precious a thing, far too short a thing, to waste it on acquaintances. But there is no need to be unkind. Propitiate all living creatures. Be reverential and considerate to all living things, human and non-human. Visit the grave of someone who is dead, everyday. Remember that human beings have the power of creating a sort of half-consciousness in dolls and in stuffed birds and in other so-called “inanimate” things. Be religious in the only real, deal sense. That is to say, indulge fetish-worship to the extremist limit. Thus in your imaginative life the beast-gods of the remote Past will beckon to the beyond-human gods of the remote future…

…Between such a one (as John Cowper Powys calls an ichthyosaurus half-god – one who is in the “I am I” state of being, in solitude of thought, without the baggage of the tribe) and the dying leaf dropped in the gutter, or any deserted and broken object that has been endowed with an obscure half-life by the unconscious creative “aura” of the human touch, there is a magnetic link. Thus it may well be said, as Apuleius maintained, that the world is full of dethroned and bewitched and abject little gods. The world is pluralistic and full of magic; and it is a grievous mistake, and one of the chief and most obstinate causes of man’s present misery, that people have given up polytheism. Not to worship the sun and moon and earth and sea, and each one of the planets and stars, is to make a pompous ass of yourself. They are all gods and they can all answer prayers… Every living soul, if it cares to demand it, can be made true even if there is no conscious life after death. There are a great many mores forces at work than the merely conscious ones. Our attitude toward the First Cause (JCPs description of an ultimate creator, a dual natured force behind the cosmos) need not be religious. It ought not to be so unless we are consciously forgetting the evil side of this Ultimate Being and thinking only of its good side. It is best to worship the “little gods” and defy the First Cause. Thus, what we should really aim at is to become idolaters. The essence of poetry is idolatry. Our modern machine-made misery come from the fact that we shrink from natural idolatry. It has become a moral compulsion with us to shrink from this – to be what is considered “reasonable” is the new-fangled fashion. Such arid and lifeless “rationality” is far more removed from the real secret of life than the craziest superstition.