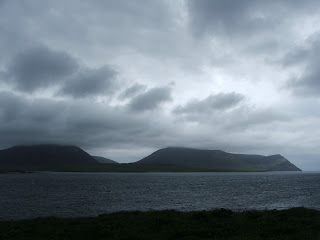 ... this ecstasy swings for ever backwards and forwards, like the motion of an everlasting pendulum or the advance and retreat of the sea-tide. The male hath his Beatific Vision in his unremitted possession of the female; she in her unremitted passivity in being thus possessed. Their mutual ecstasy is something that isolates them from all the rest of the universe. They come to resemble that strange double-natured being to whom Plato in his Symposium makes such fanciful and playful reference. Before they met each other, they went about through the world maimed, abortive, disillusioned, quasi-moribund. But now that they have met, they have become two in one. They have come to resemble those two horned flames in whose inseparable conjunction Dante beheld the eternal fate of Ulysses and Diomed! It is, indeed, as if, enclosed in the same hollow opalescent shell of ecstatic isolation, the male held the female in a perpetual trance, while the female, responding to this act of possession in an eternal dream of abandoned self-immolation, would as soon perish as awaken!

Love of this kind... could endure in exactly the same psychic-physical state without a flicker of change - the male possessing, the female possessed - for thousands of years. It is clear proof that the patient and subtle Marcel Proust was emotionally very limited, that he should be continually insisting that change and novelty and jealousy and disturbance should be so necessary to love...

...What makes such an encounter so great a thing is that it is the blending of two eternal dialogues in a fivefold eternal dialogue. It is therefore an absolute living quincunx - the number which, according to Sir Thomas Browne, is the most lucky of all. Each of the two lovers is a self confronting a not-self. Each of the two keeps up its indignant dialogue with their First Clause, which is , of course, the hypothetical substratum of every inflowing impression composing both their not-selves. And in addition to this, each converses consciously or unconsciously with the other. Every pair of real lovers in this deep physical-metaphysical embrace make up a third entity, the united multiple of alternate gratitude and indignation - is the cumulative voice of the Number Five. The vast mass of animals, fishes, reptiles, plants, share in this universal planetary love-making and in its fivefold ecstasy. No human speech is theirs; but a vibration radiates from every such perfect embrace, which creates a new pattern in the fluctuating taper sty of the wind-blown cosmos.

Each pair of lovers, isolated in its planetary shell, is for ever gathering more and more magnetic power wherewith to enjoy the good and to defy the evil of that ultimate First Cause which is responsible - through the medium of Chance - for their having come together at all. Never for one second do they forgive this First Cause for the horrible suffering which they know exists around them. From their united ecstasy there is for ever projected a protest against this suffering, and an out-jetting godlike command - quivering with the good-will of thier own chance-favoured happiness - that this suffering should be lessened and that all living sentiences should attain pardon and peace.

page 140
John Cowper Powys
In Defence of Sensuality
1930
Posted by The Cinquefoil Press at 06:50