The Heart of London 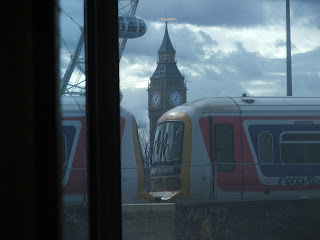 Outside the Royal Festival Hall, London, 2005

When eight million men and women decide to live together on the same spot things are bound to happen.

London in lineal descent from Thebes and Rome, is one of those queer massings together of humanity which Civilization dumps on a small plot of earth before handing the lease of Destiny, not knowing whether to laugh or cry about it. Great cities are strange inevitable phenomena. It is wrong to compare them with hives, for in a hive the wish of the individual has been sacrificed unquestioningly to the good of the community. Had we ascended from the bee perhaps the greatest happiness we could achieve would be an unspectacular death in the service of the London County Council. But in London, as in all modern cities, it is the individual who counts. Our eight millions split themselves up into ones and twos: little men and little women dreaming their private dreams, pursuing their own ambitions, crying over their own failures, and rejoicing at their own successes.

Fear Built the first cities. Men and women herded behind a wall so that they might be safe. Then came trade; and cities grew into lucky bags in which men dipped for profit. Essentially they remain lucky bags to this day. London's millions pour into London and carry off their loot every Friday; But that, thank heaven is not the whole story. A city develops Tradition and Pride. London has greater tradition and pride than any other city in the world.

So when I ask myself why I love London I realize that I appreciate that ancient memory which is London - a thing very like family tradition for which we in our turn are responsible to posterity - and I realise that I am every day of my life thrilled, puzzled, charmed, and amused by that flood-tide of common humanity flowing through London as it has surged through every great city in the history of civilization. Here is every human emotion. Here in this splendid theatre the comedy and the tragedy of the human heart are acted day and night. Love and treachery, beauty and ugliness, laughter and tears chase one another through the streets of London every minute of the day, often meeting and mixing in the strangest fashion, because London is just a great mass of human feeling, and Man, never clearly labelled "Hero" or "Villain" as in melodrama, is capable of so much moral complexity that you might almost say that good and bad exist in him at the same moment.

Had I been born a few thousand years ago I feel sure that I could have written much the same book about Thebes or Babylon, because the only things that change radically in life are fashions and inventions. The human heat was patented long ago and the Creator has not seen fit to bring out a later model.

After dinner one night a woman fixed large eyes on me and confided that in a previous incarnation she had been Cleopatra. She was my tenth Cleopatra. She told me that there was no romance in modern life, and looking a little withdrawn as if remembering some Alexandrian indiscretion, she said: " No surprise, no - you know what I mean? - not real poetry."

I always think it best not to argue with queens; but I believe that the surprise, the romance, and the poetry of a modern city are fiercer than they were in the past. The drama of the ancient autocracies was played with so small a cast. the rest was suffering. People with large eyes were never in their past lives anything less than queens or princes, and thus their naturally vivid memories of a small and brilliant circle dim a recollection of the dumb majority beneath their wills. In spite of the supply of desirable lamps in Bagdad the census of owner-drivers must have been quite negligible, so that the average inhabitant must have lived through the romance of those days sitting in the same patch of sun, bitten by insects and trodden on by Negros.

In London, and in the free cities of this modern world, the drama of life widens, the characters increase and the unchanging human heart, no happier perhaps in the long run, beats less timorously than it did, yet leaping in sympathy to the same old loves and fears and hates.

Every day our feelings vibrate to some stray unimportance. Life is full of portentous triviality. Is it not strange that our minds often refuse to recognize some sensation - a word like a worn out boot - while they react immediately to something so small as to be almost foolish? You may be bored stiff by the front page of the evening paper, but you go home remembering some common thing seen or heard; some little humanity: the sight of a man and a girl choosing a child's cot, two people saying good-bye at a street corner, the quiet hatred in a man's eyes - or the love...
Posted by The Cinquefoil Press at 01:33