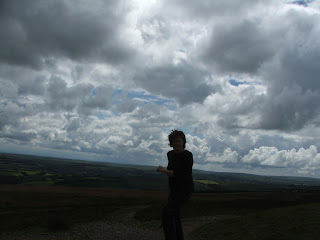 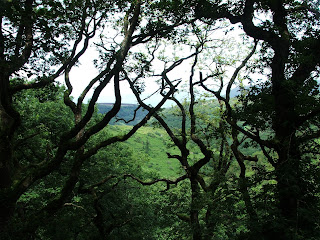 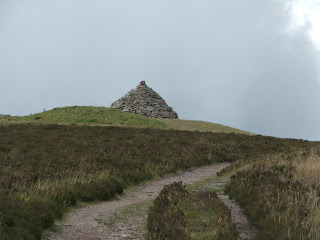 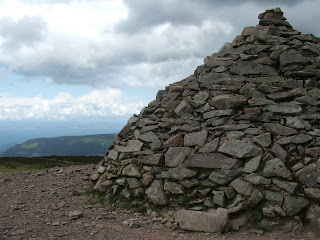 Wikipedia:
Dunkery Beacon is the highest hill on Exmoor, south-western England, and the highest point in Somerset. It lies just four miles from the Bristol Channel at Porlock. The shortest route of ascent goes from the car park at Dunkery Gate, and is just 1.2 km long. There are extensive views from the summit, including both the Bristol and English Channel coasts, the Brecon Beacons including Pen Y Fan, Bodmin Moor, Dartmoor, the Severn Bridges and Cleeve Hill 86 miles away in Gloucestershire. The hill is blanketed in heather and in the summer this gives it a deep purple colour. Ling and bell heather, gorse, sessile oak, ash, rowan, hazel, bracken, mosses, liverworts, lichens and ferns all grow here or in surrounding woodland, as well as some unique whitebeam species. Exmoor ponies, red deer, pied flycatchers, wood warblers, lesser spotted woodpeckers, redstart, dippers, snipe, skylarks and kestrels are some of the fauna to be found here and in nearby Horner Woods. Horner Woods are also the home to 14 of the 16 UK bat species, which include barbastelle and Bechstein bats. Dunkery Beacon was given to the National Trust in 1935 by Sir Thomas Ackland, Colonel Wiggin and Allan Hughes along with the rest of the Holnicote Estate an event commemorated by the summit memorial cairn. There are several Bronze Age burial mounds at or near the summit, two of the larger ones are Joaney How and Robin How. Dunkery is composed of Devonian sedimentary rock, as can be seen in the red soil.

The highest geographical point in Somerset, the tip of the Mendip TV Mast, is higher above sea level at 1924 feet (586 metres).

Based on the formula 'distance of hill from its nearest higher neighbour in km squared, multiplied by its height in metres', Dunkery is ranked 23rd in the UK in terms of dominance. The nearest higher hill is Yes Tor 37 miles (60 km) away.

It is the highest hill in southern England outside of Dartmoor.

Dunkery Beacon 8th July
Posted by The Cinquefoil Press at 12:42