The Road to Fairyland 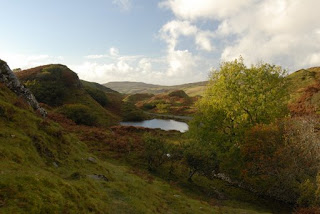 The Fairy Glen - Isle of Skye
Do you seek the road to Fairyland? I'll tell: it's easy quite. Wait till a yellow moon gets up o'er purple seas by night, and glides a shining pathway that is sparkling diamond bright. Then, if no evil power be nigh to thwart you, out of spite, and if you know the very words to cast a spell of might, you get upon a thistledown, and, if the breeze is right, you sail away to Fairyland along this track of light.
Ernest Thompson Seton

...With wonder, with delight, the daughter of Murrachu watched the hosting of the Shee. Sometimes her eyes were dazzled as a jewelled forehead blazed in the sun, or a shoulder-torque of broad gold flamed like a torch. On fair hair and dark the sun gleamed: white arms tossed and glanced a moment and sank and reappeared. The eyes of those who did not hesitate nor compute looked into her eyes, not appraising, not questioning, but mild and unafraid. The voices of free people spoke in her ears and the laughter of happy hearts, unthoughtful of sin or shame, released from the hard bondage of selfhood. For these people, though many, were one. Each spoke to the other as to himself, without reservation or subterfuge. They moved freely each in his personal whim, and they moved also with the unity of one being: for when they shouted to the Mother of the gods they shouted with one voice, and they bowed to her as one man bows. Through the many minds there went also one mind, correcting, commanding, so that in a moment the itnerchangeable and fluid became locked, and organic with a simultaneous understanding, a collective action - which was freedom...

... In a little they reached the grass land and the dance began. Hand sought for hand, feet moved companionably as thought they loved each other; quietly intimate they tripped without faltering, and, then, the loud song arose - they dang to the lovers of gaiety and peace, long defrauded - ...