Cybele and Leaves in the Wind 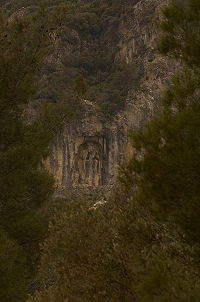 13th century B.C. Hittite statue of Cybele on the slopes of the Mount Sipylus in Manisa, Turkey

… For the great goddess Cybele, whose forehead is crowned with the turrets of the Impossible, moves through the generations from one twilight to another; and of her long journeying from cult to cult, from shrine to shrine, from revelation to revelation, there is no end. Mountains have rolled down upon many of her temples. The depths of the Atlantic and Pacific have gathered others into their dim silt and monstrous slime at the bottom of the world. The obliterating sand storms of the desert have buried not a few. Some are lost in the untraversed forests of the new hemisphere. The days of the years of men’s lives are like leaves upon the wind and like ripples upon the water; but wherever the Tower-bearing Goddess moves, journeying from one madness of Faith to another, these pinnacles of desperation mount up again.

The builders of Stonehenge have perished; but here are those who worship its stones still. The builders of Glastonbury have perished; but here are people, yet living among us, whose eyes have seen the Grail. The ribs of our ancient earth are riddled with desperate pieties; her hollow caves are scooped out with frantic asseverations; and the end is not yet.

The Towers of Cybele still move in the darkness from cult to cult, from revelation to revelation. Made of a stuff more lasting than granite, older than basalt, harder than marble, and yet as insubstantial as the airiest mystery of thought, these Towers of the journeying Mother still trouble the dreams of men with their tremulous up-rising. Bowed beneath the desolation of futility, eaten by the worm of despair, these tragic Towers still rise from our planet’s surface, still sway disconsolately in the wind of its orbit, still gleam cold and white under its recurrent moons…

…The powers of reason and science gather in the strong light of the Sun to beat her down. But evermore she rises again , moving from the mists of dawn to the mists of twilight, passing through the noon-day like the shadow of an eclipse and through the midnight like an unblown trumpet, until she finds the land that has called her and the people whose heart she along can fill.

For the turrets upon the head of Cybele are made of those strange second thought of all the twice-born in the world; the liberated thoughts of men as they return from their labour and the brooding thoughts of women as they pause in the midst of their work. The powers of reason may number the Stones of Stonehenge and guess at the origin of the Grail of Glastonbury; but they cannot explain the mystery of the one, nor ask the required magic questions of the to her.

No man has seen Our lady of the Turrets as She moves over the land, from twilight to twilight; but those “ topless towers” of hers are the birth-cries of occult generation, raised up in defiance of Matter, in defiance of Fate, and in defiance of cruel knowledge and despairing wisdom.

Men may deride them, tear them down. They may drive their engines though the ruins of Glastonbury and their airplanes over the Stones of Stonehenge.

Still in the strength of the Unknown Dimension the secret of these places is carried forward to the unborn, their oracles to our children’s children.

For She whom the ancients named Cybele is in reality that beautiful and terrible Force by which the Lies of great creative Nature give birth to Truth that is to be.

Through all the stammerings of strange tongues and murmurings of obscure invocations she still upholds her cause; the cause of the unseen against the seen, of the weak against the strong, of that which is not, and yet is, against that which is, and yet is not. Thus she abides; her Towers forever rising, forever vanishing. Never or Always.

A Glastonbury Romance
Posted by The Cinquefoil Press at 08:21