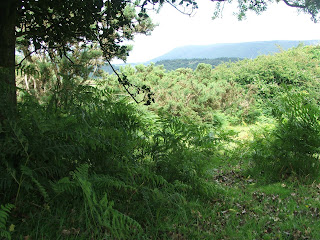 Hyperion: A fragment
Deep in the shady sadness of a vale far sunken from the healthy breath of morn, far from the fiery noon, and eve's one star, sat gray-hair'd Saturn, quiet as a stone, still as the silence round about his lair; forest on forest hung about his head like cloud on cloud. No stir of air was there, not so much life as on a summer's day robs not one light seed from the feather'd grass, but where the dead leaf fell, there did it rest. A stream went voiceless by, still deadened more by reason of his fallen divinity spreading a shade: the Naiad' mid her reeds press'd her cold finger closer to her lips.

Along the margin-sand large foot-marks went, no further than to where his feet had stray'd, and slept there since. Upon the sodden ground his old right hand lay nerveless, listless, dead, unsceptred; and his realmless eyes were closed; while his bow'd head seem'd list'ning to the Earth, his ancient mother, for some comfort yet.

It seem'd no force could wake him from his place; but there came one, who with a kindred hand touch'd his wide shoulders, after bending low with reverence, though to one who knew it not. She was a Goddess of the infant world; by her in stature the tall Amazon had stood a pigmy's height: she would have ta'en Achilles by the hair and bent his neck; or with a finger stay'd Ixion's wheel. Her face was large as that of Memphian sphinx, pedestal'd haply in a palace court, when sages look'd to Egypt for their lore. But oh! how unlike marble was that face: how beautiful, if sorrow had not made sorrow more beautiful than Beauty's self. There was a listening fear in her regard, as if calamity had but begun; as if the vanward clouds of evil days had spent their malice, and the sullen rear was with its stored thunder labouring up. One hand she press'd upon that aching spot where beats the human heart, as if just there, though an immortal, she felt cruel pain: the other upon Saturn's bended neck she laid, and to the level of his ear leaning with parted lips, some words she spake in solemn tenour and deep organ tone: some mourning words, which in our feeble tongue would come in these like accents; Oh how frail to that large utterance of the early Gods! "Saturn, look up! - though wherefore, poor old King? I have no comfort for thee, no not one: I cannot say, 'O wherefore sleepest thou? For heaven is parted from thee, and the earth knows thee not, thus afflicted, for a God; and ocean too, with all its solemn noise, has from thy sceptre pass'd; and all the air is emptied of thine hoary majesty. Thy thunder, conscious of the new command, rumbles reluctant o'er our fallen house; and thy sharp lightning in unpractised hands scorches and burns our once serene domain. O aching time! O moments big as years! All as ye pass swell out the monstrous truth, and press it so upon our weary griefs that unbelief has not a space to breathe. Saturn, sleep on:- O thoughtless, why did I thus violate thy slumbrous solitude? Why should I ope thy melancholy eyse? Saturn, sleep on! while at thy feet I weep"