The Quincunx will be on the future 26 Door 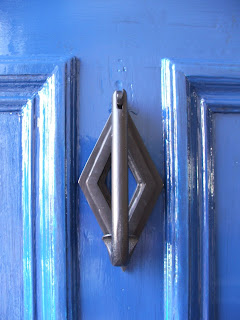 Five is a circular number as it produces itself in its last digit when raised to its own power. The pentacle, like the circle symbolizes whole, the quincunx being the number of its center and the meeting point of heaven, earth, and the four cardinal points plus the center point.

Five is also representative of the Godhead - Central Creator of the four fours plus itself equalling five. Five is the marriage of the hieros gamos as combination of feminine and the masculine. Feminine being even, as 2, in frequency and masculine being odd as 3 in frequency = 5.

The number five symbolizes meditation; religion; versatility. It represents the five senses (taste, touch, smell, sight, hearing) everywhere except in the East. In the East there are six---the extra being Mind. We find meanings to five in the five petaled flower, five pointed leaves--especially the ROSE. The Rose has much symbolism, but also the lily, vine, all of which represent the microcosm.

Buddhist: belief the heart has four directions-- the heart center makes five, symbolizing, universality. This idea is also symbolized by the Sacred Mountains surrounded by the four islands. There are five Dhyani Buddhas: Vairocana, the Brillant, who is represented by the wheel, the witness; Akshobhya, the Imperturbable, with vajra, the East and blue; Ratnasambhava, the Jewel-born, jewel, south, yellow; Amitabha, Boundless Light, lotus, West, red; Amoghasiddhi, Infallible Success, sword, North, green.

Christian: Five depicts human beings after the Fall in the Garden of Eden. There are five senses; five points to the cross; wounds of Christ; fishes feeding five thousand; and books of Moses.

Egyptian: There are five crocodiles of the Nile.

Graeco-Roman: Five is the nuptial number of love and union.. It is the number of Venus. Venus years are completed in groups of five. Apollo as god of light has five qualities: omniscience, omnipresence; omnipotence, eternity, and unity.

Hindu: Five is the quinary groups of the world; the five elements of the subtle and coarse states; their primary colors; of senses; five faces of Siva and the twice-five incarnations of Vishnu.

Parsee: Five is a significant number in Parsee and Mandaean rites - possibly connected with the five sacred intercalary days of light.

Pythagorean: Hieros, gamos, the marriage of heaven, earth. It represents Apollo as God of light and his five qualities.
Posted by The Cinquefoil Press at 12:25